This post returns to the subject of some my Central Asia resource reviews from 2014 (Ole Olufsen, Bukhara and Khiva photographic archives,  Through Khiva to Golden Samarkand, and In Russian Turkestan). A desire to redeem the inordinate amount of time I spent chasing down fascinating facts last Friday is partial motivation. But I also hope what I discovered will interest and assist others as well. 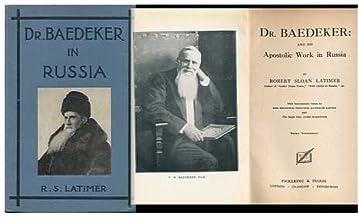 It all started with a quest to track down an early twentieth-century Baedeker’s travel guide to Russia. My first search results turned up Frederick Baedeker (1803-1906), an Englishman of German descent who dedicated the last thirty years of his life to missionary work within the Russian Empire. He obtained permission to preach to tens of thousands of people, in drawing rooms, lecture halls, and prisons, during a time when evangelistic activity was officially frowned upon. On one journey he traversed 7,000 miles, visiting prisoners in the far east of Russia and bringing injustices to the attention of officials. The full text of a biography by Robert Sloan Latimer, Dr. Baedeker and His Apostolic Work in Russia (1907), is available on The Internet Archive in multiple formats.

My piqued interest in Frederick Baedeker led me to On the Edge: Baptists and Other Free Church Evangelicals in Tsarist Russia, 1855-1917 (2013). (Incidentally, Ralph Wardin’s book was published here in Eugene, OR, by Wipf & Stock, under whose auspices I did some freelance editing some ten years ago.)

A search within the book for references to Turkestan revealed that a group of Plymouth Brethren conducted missionary work in and around Tashkent in the early twentieth century. Two young men with medical training, Martin Thielmann and Rudolf Bohn, arrived in Tashkent in 1908. Over the course of several years both men married, and several other workers joined them. After the Bolshevik revolution in 1917, Bohn and two other men were interned in Siberia. Dates given for the missionaries’ departure from the country vary from 1918 to 1921. Wardin quotes a report that, sadly, Thielmann died in Chimkent in 1923.

I did eventually succeed in my initial quest, though not until four days later. These guidebooks, published by the German Karl Baedeker company (no relation, as far as I can tell, to Frederick), were the final word on travel in the 19th and early 20th centuries. In fact, the first and only English edition of Russia with Teheran, Port Arthur, and Peking (1914) is still regarded by some as a comprehensive handbook  to pre-Soviet Russia, Central Asia, and Eastern Europe. (Note: I first encountered the Baedeker guidebooks in my mother-in-law’s vast library. She had–and now we have–the 1905 Greece edition.)

The first (and only) English edition of the Russia guide ranges from $409 to $3,400. Fortunately, several facsimile editions are available from online retailers. Or you can download the full text from the Internet Archive. Navigating it is a little onerous. But if you want to know how many kopeks you can expect to pay for a phaeton from the Tashkent station to Russian Town (or Native Town), how many days by horseback to Namangan, or whether the hotel restaurant is any good (the Tzakho is only “fair”), it’s all there.

In his 1916 travelogue to his wife, the American Frederick Holbrook writes of Baedeker, “The 1914 edition on page 367, route C, gives you the route we went from Moscow …” And so it does.

Through Turkestan and the Caucasus also provides photographs of Samarkand and Bukhara monuments and street scenes as they appeared at the time. Holbrook includes details of the train travel, the terrain, and many aspects of Central Asian life–food, modes of travel, style of housing. It’s a treasure trove for a researcher. Holbrook’s narrative is engaging and approachable; had I the time, I would love to sit down with a cup of choi and read it from start to finish.  The entirety of its sixty-one pages (not counting photos) is available for free download on Google Books.