The Large Rock and the Little Yew, by Gregory Ahlijian 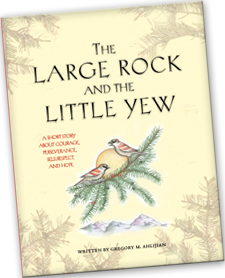 This remarkable picture book inspires both through its message and through its very existence. Retired arborist Gregory Ahlijian has been volunteering at the Jasper Mountain facility for abused children for several years. The students he has encountered there (ages 6 to 13) inspired him to write this picture book about overcoming adversity. Ahlijian financed the printing, the editing, and the remarkable artwork by Janna Roselund and is now donating the full retail price to Jasper Mountain.

The Large Rock and the Little Yew tells the story of a yew seed that falls into a deep crack in a large boulder. When the seed begins to sprout, the boulder continually insists that it will never survive in the outside world. In the end, the yew overcomes the odds and grows into a large tree with roots that surround the boulder. An actual tree in England served as a model for the story; a photo appears at the end of the book.

Ahlijian draws on his professional knowledge of trees in crafting what is really an extended parable. He also infuses it with the values he works to impart to the young people he mentors at Jasper Mountain: respect, confidence, thankfulness, courage, determination, kindness, generosity. The Large Rock demonstrates that hardships are not just obstacles to be overcome; they provide opportunities to grow and develop strength. The Epilogue points out that were it not for the rock, the yew tree would be just another tree in the forest, rather than an awe-inspiring testimony to the power of nature.

On April 28 from 3 to 5 p.m., The Book Nest (inside Indulge! at 1461 Main St., Springfield, OR) will host a reading and signing with Ahlijian. In addition, we will raffle off an original painting by Springfield artist D. Brent Burkett, the proceeds of which will also benefit Jasper Mountain. More information about Ahlijian’s book is available on his site: http://www.littleyewtree.com/.

Call me ignorant, but I wouldn’t have turned to France in search of contemporary Christian literature for kids. Nevertheless, I recently discovered two great books of Psalms rendered for children that both have roots in France.

Sing a New Song (Eerdmans, 1997) is a collection of single lines from the psalms, paraphrased, combined, and illustrated by Bijou Le Tord. The book reads like a single psalm, even though the phrases have been selected from various psalms and recombined. Le Tord was born and raised on the French Riviera; she now lives in Sag Harbor New York.

Psalms for Young Children (Eerdmans 2008) is a translation of Les Psaumes pour les tout-petits (Bayard Editions Jeunesse 2003). The themes, ideas, and images from selected psalms have been distilled into language accessible to children by Marie-Helene Delval and illustrated by Arno. Unfortunately, Eerdmans does not identify a translator (unless it was Delval herself ).

Some might object to the liberties taken with the text of these two books, but I think they are a great way to introduce children to the concrete imagery, themes, and language of the psalms. The original psalms might connect with some children, but most, I suspect, have trouble identifying with the language  and focusing their attention through an entire psalm. In contrast, after we had read Psalms for Young Children once through (in a number of sittings), my five-year-old started making requests like, “Read the one with the mother hen with her chicks,” or “Read the one that says you always forgives me when I do wrong things.'” It even inspired her, eventually, to write her own “psalm.”

We’ve also enjoyed a third book in a similar vein: Regolo Ricci’s illustrated version of the twenty-third Psalm, The Lord is My Shepherd (Tundra Books, 2007). My daughter and I both loved the rich illustrations of nature and farm life in bold hues, set into intricate borders. The text is based on the King James Version of the Bible. Ricci, as his name suggests, is Italian born, raised in Italy.